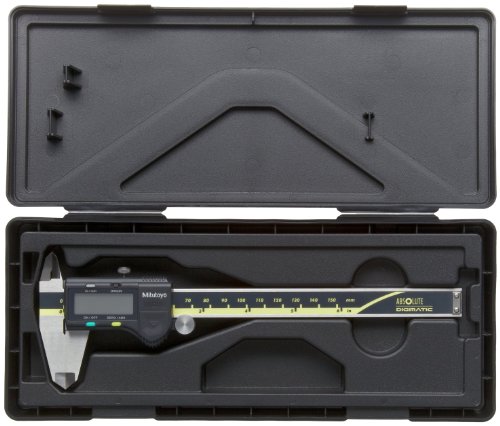 The Mitutoyo ABSOLUTE 500 series caliper is a Digimatic digital caliper that is made of durable hardened stainless steel and uses Mitutoyo’s ABSOLUTE linear encoder technology, which allows you to “set and forget” the origin and measure in awkward or difficult locations.

This digital caliper has LCD readout and function control buttons on the caliper face, including Origin to set and retain the original measuring point, and Zero/ABS (Absolute Scale) to zero-set the LCD display. It uses the metric measuring system.

Although identical to dial and vernier calipers in its ability to make precise measurements, the digital caliper also has an LCD, which clearly shows values and increases reading reliability over the other types, and reflects all ABSOLUTE system activities. The Absolute Scale (ABS) function tracks the origin point you set, even after shutoff. Once on again, the caliper can immediately start measuring, without zero resetting or concern of overspeed errors. The LCD can be “zeroed out” before making and comparing incremental measurements without having to subtract the first measurement from the second.

The calipers use the ABSOLUTE electrostatic capacitance linear encoder which helps prevent overspeed errors. They measure outer diameter (OD), inner diameter (ID), depth, and step, where the butt end of the fixed jaw measures one end of a work piece before its upper/lower or inner/outer “steps” are measured. LCD Resolution is 0.01mm. Also included are origin-setting, zero-setting, and on/off automatic shutoff function buttons. A Digital LCD Data Reading Hold function is available with the optional Data Hold Unit (sold separately). An alarm alerts the user to low voltage and scale contamination and counting value composition errors. A rolling thumb wheel makes fine adjustments and a thumb screw locks the scale’s position. Response speed is unlimited. Each caliper includes, and is powered by, one SR44 silver oxide cell battery that lasts approximately 3.5 years with continuous normal use.

Calipers measure the distance between two opposing sides of an object. They make inside, outside, depth, or step measurements, according to their type. Calipers are commonly used in architecture, metalworking, mechanical engineering, and machining. The simplest calipers have two legs to mark the two points and require a ruler to take the measurement. More complex calipers use two sets of jaws instead of legs and have up to two graduated scales. Vernier, dial, and digital calipers give direct and accurate readings and are functionally identical, having a calibrated scale with a fixed jaw, and another jaw with a movable pointer that slides along the scale. The vernier caliper has a scale sliding parallel to the main scale for an additional, fractional reading to improve measurement precision. The dial caliper has a circular dial with a pointer on a toothed gear rack replacing the second vernier scale. As with the vernier, this second measurement is added to the reading from the main scale to obtain the result. The digital caliper takes a differential by zeroing the display at any point along the slide, with an LCD that displays a single value in English and/or metric units.

Mitutoyo manufactures precision measuring tools, metrology equipment, and systems. The company was founded in Tokyo in 1934 and formed Mitutoyo America Corporation in 1963, which is headquartered in Aurora, IL.